Vietnam War veterans to be honored at event Wednesday in Indianapolis

The event includes music and a preview of a new Vietnam War documentary.

News-Sentinel.com | INDIANAPOLIS –  Indiana public radio and television stations invite people currently serving in the military to go online to receive free tickets to the Salute to Vietnam Veterans event at 7:30 p.m. Wednesday at the Murat Theatre at Old National Centre in Indianapolis.

The event, which also will include Vietnam War veterans, will feature a performance by The Texas Tenors vocal group and a preview of the film “The Vietnam War,” by noted filmmaker Ken Burns and Lynn Novick, a news release from WFWA, PBS-39, in Fort Wayne said.

Those currently in the military can get their free tickets by going to ipbssalute.eventbrite.com and using the promo code USA. Select from the available seats indicated on the seating map and print your tickets to bring for admission to the event.

The Texas Tenors have won three Emmy Awards and finished fourth in 2009 on the talent show “America’s Got Talent.”

Burns’ and Novick’s documentary on the Vietnam War will premiere Sept. 17 on PBS stations nationally. It explores the human side of the war through interviews with nearly 80 people, including those who fought in the war, those who opposed it back in the United States, and combatants and civilians from North and South Vietnam, the WFWA news release said. 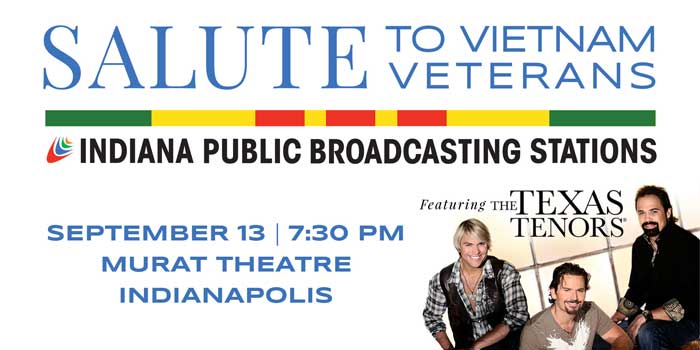