Vietnam Veterans to be honored

KateShepherd | Indianapolis, IN –  Vietnam Veterans will be honored at a September event that Kate Shepherd Communications has been proud to consult on.  Please buy your tickets today, because they are going FAST!

The Indiana Public Broadcasting Stations SALUTE to Vietnam Veterans will feature THE TEXAS TENORS in concert.  THE TEXAS TENORS are a three-time Emmy award winning vocal group and a top four finalist in the fourth season of America’s Got Talent.  At 7:30 p.m. on Wednesday, September 13 at Murat Theatre at Old National Centre, audiences will enjoy their unique blend of country, classical, Broadway and current pop music, as well as a moving tribute to the armed services including patriotic music. 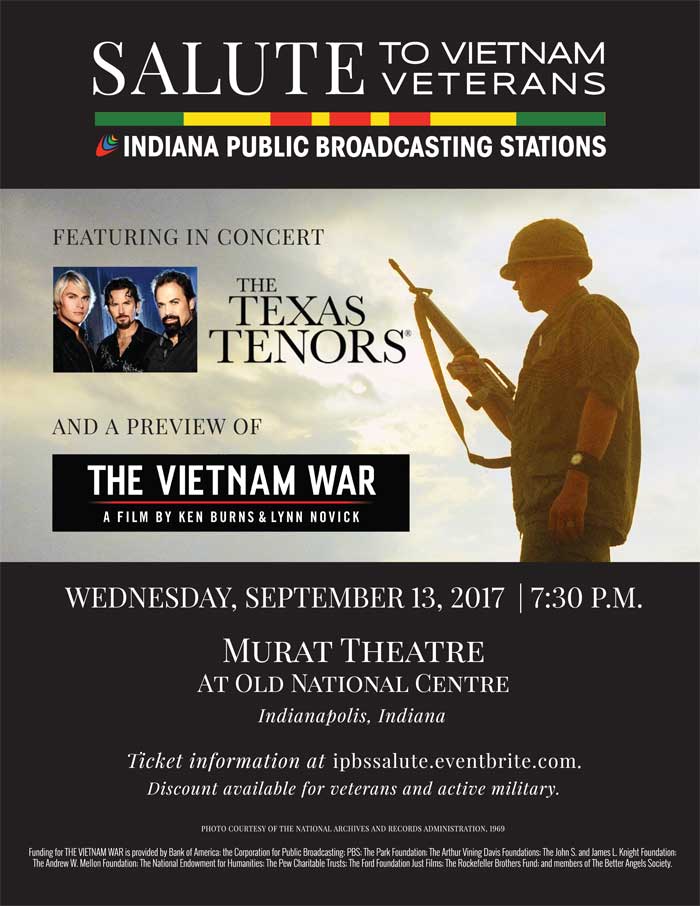 In addition to the performance by THE TEXAS TENORS, the audience will be treated to a preview of THE VIETNAM WAR, a film by Ken Burns and Lynn Novick which will premiere on PBS stations September 17.  THE VIETNAM WAR tells the epic story of one of the most consequential, divisive, and controversial events in American history as it has never been told before on film. The documentary explores the human dimensions of the war through testimony of nearly 80 witnesses from all sides–Americans who fought in the war and others who opposed it, as well as combatants and civilians from North and South Vietnam.

Another important part of the evening will be a special ceremony honoring Vietnam Veterans and their families. Ticket prices range from $32 to $50 with a 10% discount for veterans and active military.  Tickets can be purchased online.

“The performance of The Texas Tenors and the work of documentary producer, Ken Burns will come together at this event to make a powerful tribute to our nation’s veterans.  The public broadcasters throughout Indiana are pleased and privileged to play a role in presenting this patriotic performance which honors our veterans and their families,” said IPBS Executive Director Roger Rhodes.

SALUTE is presented by Indiana Public Broadcasting Stations (IPBS) representing the nine NPR radio and eight PBS television stations in Indiana. Together they engage and enrich each community through distinctive programs and services for ALL Hoosiers.