The Texas Tenors will perform during Pageant Week

PrattTribune.com | Pratt, Kansas –  The Miss Kansas Organization is excited to announce The Texas Tenors will perform a special concert on Friday, June 5 during Miss Kansas Pageant week in Pratt. The concert will be held at Dennis Lesh Sports Arena on the campus of Pratt Community College where the pageant is held each June.

This year the Miss Kansas Pageant will celebrate 60 consecutive years of the pageant being held in Pratt. Miss Kansas 2015 will be crowned during the final evening competition on Saturday, June 6.

The Texas Tenors concert tickets went on sale Saturday, April 11. Tickets may be purchased through Select-A-Seat at 855-755-SEAT or http://www.selectaseat.com/events/Country/texas-tenors.php

The Texas Tenors have performed over 800 concerts around the world including a 24-city tour in the United Kingdom, Shanghai, China and collaborations with some of the most prestigious symphonies, performing arts centers and arenas, never forgetting their roots.

With their hit 3-time Emmy Award Winning PBS special now airing across the US and a Billboard Top 5 album “You Should Dream,” it’s easy to see why The Texas Tenors are quickly becoming America’s favorite new tenors since their whirlwind debut four years ago on NBC’s America’s Got Talent.

Preliminary competition will be held June 3 and 4. Miss Kansas 2015 will compete for the Miss America crown in Atlantic City this September.

Tickets for the Teen and Miss competitions go on sale May 1. For more information, visit misskansas.org or missamerica.org. 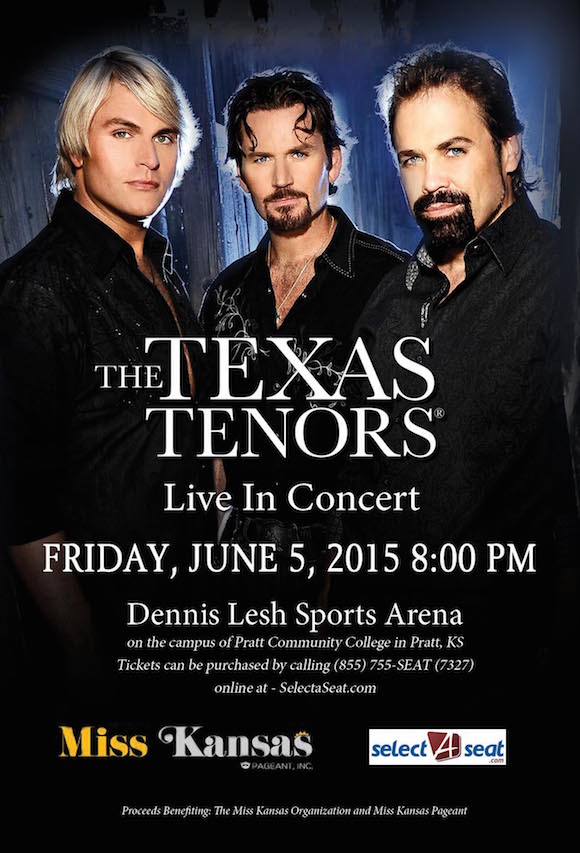 Next Post:The Texas Tenors Opening Night – The Night My Papa Will Never Forget