The Texas Tenors to return with special sound & cowboy charm

Concert on Sept. 30 will be trio’s third appearance at the Performing Arts Center

LeeCollegeNews.com | BAYTOWN, TX — After lighting up the stage on the nationally televised competition show “America’s Got Talent,” winning three Emmy Awards for their PBS concert special and selling out the Lee College Performin 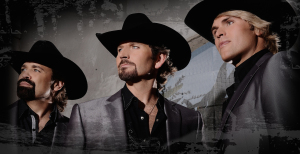 g Arts Center (PAC) for two different performances, The Texas Tenors are returning to the PAC this month to delight audiences with their incredible vocals and signature cowboy charm.

Since their whirlwind television debut and fourth-place finish on “America’s Got Talent” in 2009, The Texas Tenors have performed their unique blend of country, classical, Broadway and pop music in more than 1,000 concerts around the world and on their PBS special, “You Should Dream.” PBS plans to air a second concert special with The Texas Tenors in 2017.

The trio — made up of singers and classically trained musicians Marcus Collins, John Hagen and JC Fisher — cover a diverse repertoire that showcases their individual vocal talents and lush harmonies, while exploring everything from Alabama to Puccini and Bruno Mars. Their 2013 country-themed album, “You Should Dream,” reached the Top 10 and features traditional favorites like “God Bless the USA” and “Unchained Melody,” as well as two original songs and the backing of a 65-piece orchestra.

In 2014, Billboard magazine named The Texas Tenors the No. 10 classical artists in the world, and the group is routinely the premiere attraction in the tourist hub of Branson, Mo., where they perform 60 concerts at the Starlite Theatre each year. Beyond the concert halls and packed arenas, the “three friends with a dream” have made several televised performances and contributed to numerous charitable causes, including The Child Fund International, Homes for Our Troops and The Mission Project. The Texas Tenors pride themselves on remaining self-produced, self-managed and committed to providing quality entertainment for families and fans of all ages.

Lee College offers more than 100 associate degree and certificate programs, as well as non-credit workforce and community education courses, that prepare its diverse student body for advanced higher education; successful entry into the workforce; and a variety of in-demand careers. With the main campus and McNair Center located in Baytown, Texas, and a satellite center in nearby South Liberty County, the college serves a geographic area of more than 220,000 residents that includes 14 independent school districts. To learn more, visit www.lee.edu.