The Texas Tenors to open for new Ocean City venue

By Jon Bleiweis
Via: DelmarvaNow

Three-time Emmy winners The Texas Tenors is making its way to Ocean City for the inaugural performance at the Ocean City Performing Arts Center Saturday, Dec. 13.

The band formed in 2009 and debuted on NBC’s America’s Got Talent the same year. Since then, they have released multiple albums, including a live album this month. Their latest studio album, “You Should Dream,” was released in December 2013 and has been on the Billboard Classical Album chart for 39 weeks.

The Texas Tenors is comprised of John Hagen, JC Fisher and Marcus Collins. Fisher spoke with the Beachcomber about the group and its upcoming Ocean City performance. Responses have been edited for clarity and brevity.

How would you describe The Texas Tenors?

We cross over from classical to country but within those genres, we also cover Broadway and gospel and different inspirational type music. All three of us listened to different types of music. We combined, in our opinions, the best music from each genre and we present it in our show with our style and our Texas Tenor spin on each song.

What do you want people to get out of the show?

Everyone has stuff they deal with on a daily basis. When I go to see a show, I want to be transported, I want to go somewhere. When people come to our show, we get comments after all the time saying they feel like they’ve been uplifted. They leave in a better mood than they came in with. There’s a positive energy around our show and that’s the biggest complement we can get.

You cover a wide range of music, from Frank Sinatra, to The Rolling Stones, to John Denver. How do you choose what to perform?

We all kind of have a certain style that we like. One of us will bring a song to the table. With “Wild Horses,” we were in the UK doing a tour and that’s when Susan Boyle did “Wild Horses.” We thought that was cool, and here John takes it and, man, it’s got a haunting vibe now. You don’t even recognize the song when you hear it, yet its one of the songs people love the most because it’s so different with the harmonies and minor chord progressions going on. That’s what we try to do. We try and do it our own way.

With John Denver’s “Take Me Home Country Roads,” we have a very Copland-esque sound to it where it sounds more classical in nature, and it doesn’t sound like a country song in my opinion. “My Way,” that was Marcus’s dad’s favorite song. His dad loved it so much, and we stuck with it. People love the arrangement and the harmonies.

You were on “America’s Got Talent.” Did you expect the group’s popularity to skyrocket as it has since then, with thousands of followers on social media, a PBS special and three Emmy awards?

Absolutely not. We have zero expectations because we all performed solo shows on our own, and the economy hit and honestly, we all had struggles making it in this music business. It’s such a cut throat business and so difficult to get to the next level.

Our motto was just have fun, we’re all really good friends, and if we keep doing it, it’s a blessing and a plus. We kept living in the moment, we didn’t think ahead at all because we didn’t want to be disappointed, we just wanted to enjoy the moment. We know we can sing, we know we can enjoy what we do, but we’re not in control of people’s opinions of us. We didn’t plan our next song until we got voted through. It was a blessing every time we went though.

We try to work hard and we manage our group, ourselves. We think we’re one of the most successful groups in the world that are self managed.

We’re going to go back in the studio at the first of the year in Nashville. We’re trying to figure out in which direction we can go. 2015 is pretty much booked up. We can’t add much more aside from our recording time. We found it takes a lot of time to get the album and get it mixed and get it all tuned out the way we want it presented. We’ll probably record a lot of songs, but only half will actually make the album.

This is the first show to take place at the Ocean City Performing Arts Center. How does it feel to open a new venue?

That is really exciting. We’ve performed in a lot of prestigious venues but I think that’s really more exciting. In years to come, there will be hundreds and thousands of performances, to know we’ll be the very first to get the audience reaction, that’s just amazing. I don’t think there could be any more of a compliment than to give us the opportunity to open that venue. I know the guys will be very excited. We feel very honored to be able to do that. That’s really cool. 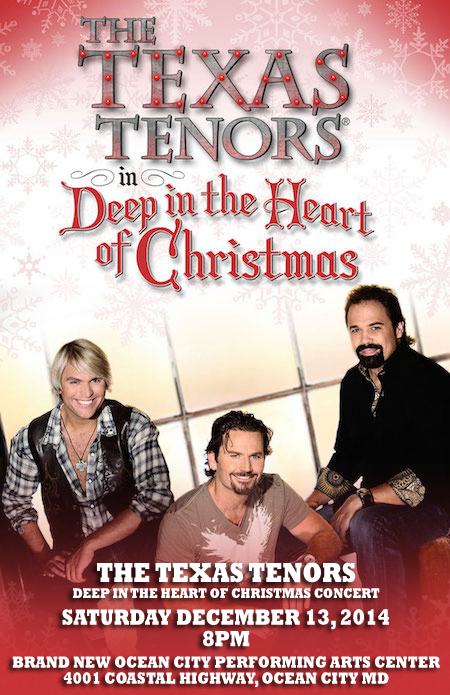