The Texas Tenors to give Victoria encore

“That is the hidden element,” said JC Fisher. “That happens 100 percent of the places we go.”

Fisher and his fellow Tenors – Marcus Collins and John Hagen – will perform a special holiday-themed concert, “Deep in the Heart of Christmas” 7:30 p.m. Monday at the Victoria Fine Arts Center. 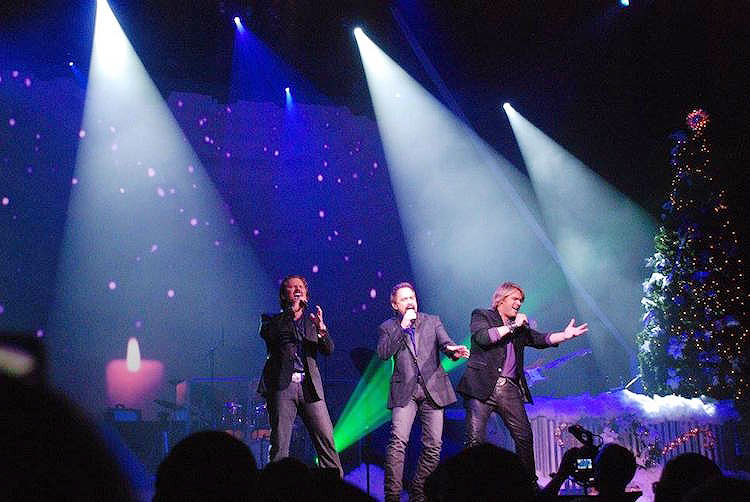 The Texas Tenors will serenade Victoria at 7:30 p.m. Monday at the Victoria Fine Arts Center. From left are JC Fisher, John Hagen and Marcus Collins.

“This is a Christmas show – all those Christmas songs you grew up with and love but with a twist,” Fisher said.

Thanks to the Victoria Symphony, less than a year after their performance in Victoria, the Tenors are back by popular demand.

And Victoria is hardly alone, Fisher said. After the group’s meteoric rise to success in 2009 during the fourth season of “America’s Got Talent,” many of the Tenors’ tour stops have asked them to return, Fisher said.

Whatever the reason may be, one thing is for certain: Victoria, like the rest of the world, loves the Tenors. Although Fisher said The Three “original” Tenors were an influence in founding their group, the Texas Tenors give a truly, one-of-a-kind show.

“We just have a very different style,” he said.

That style has garnered the Texas Tenors numerous awards and Billboard Chart spots.

Their 2013 studio album “You Should Dream” reached the third spot on Billboard’s Heatseekers Albums chart and fourth in Top Classical Crossovers.

Additionally, the group recently recorded a concert with PBS that will broadcast August or September. Furthermore, a documentary may soon be in the works, he said.

Unlike almost all other charting artists, Fisher said, the three Texas Tenors and their “world-class band” handle almost every aspect of their business.

“We pretty much do all the nuts and bolts of the business,” he said.

But, considering the group’s intimate friendship, working together is hardly a task, Fisher said.

“It’s more fun to sing with your friends,” he said.

Next Post:The Texas Tenors at Jasper Arts Center this Saturday