The Texas Tenors made a television appearance on Hallmark’s ‘Home & Family’ in January and they’re returning to the show this Tuesday to sing some Christmas songs and help in the kitchen!  They might even sing a classic too!  John, Marcus and JC will be on the entire show for two full hours so set your DVR to record The Hallmark Channel’s ‘Home & Family’ this Tuesday, December 9 at 10a/9c or tune in live and enjoy the show!

On this Tuesday’s show, ‘Home and Family’ hosts Mark and Cristina cook chili with actress Julie Benz (“Life on the Line”) as she talks about her upcoming movie; The Texas Tenors perform a song from their new Christmas album; actress Sara Wright Olsen (“Marry Me”) gives us a look at her new hit comedy series.  (Check your local listings for showtimes.)

Missed Tuesday’s broadcast?  Here’s a video from the show!

JC Fisher recently visited his 6 year old son, Jenson’s, kindergarten class for Career Day at Horizon Elementary School to talk about his music career and his experience of being a member of The Texas Tenors.   After educating the class on the in’s and out’s of being an entertainer, JC had a surprise treat for all the kids giving them each their own copy of The Texas Tenors Christmas Album ‘O Night Divine‘ so they could share it with their families on Christmas Morning. 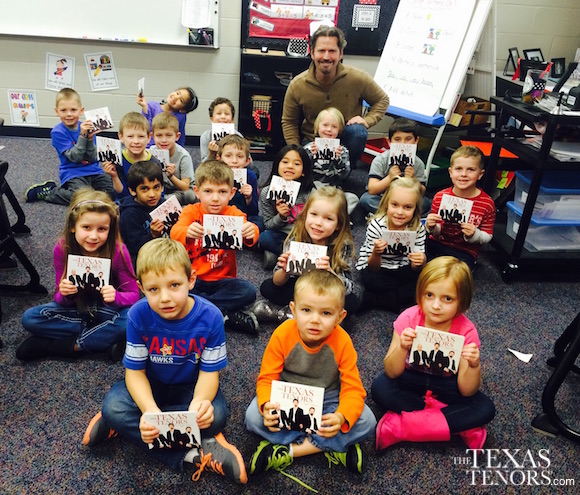 JC and Jenson Fisher with his class on Carrer Day at Horizon Elementary School.

Showing further support for education, The Texas Tenors are appearing at a charity fundraiser for The Community Scholarship Foundation of La Cañada Flintridge to help provide scholarships to local youth.  The concert will be at The Ambassador Auditorium in Pasadena, CA on Friday, December 21 at 8pm.  For more information click the banner below or visit TheTexasTenors.com.

The Texas Tenors have a few busy months coming up in December and January!  Marcus and JC recently had to race from Branson to Kansas City just after their Christmas Concert at The Starlite Theater to catch their flights to Phoenix.  They were racing to get to The Texas Tenors 2 Sold Out Shows at The Del E Webb Center for the Peforming Arts in Wickenburg, Arizona.  While they were there they also joined the Webb Center’s Executive Director, Cathy Weiss, for a special presentation of ‘A Conversation with The Texas Tenors‘ the day before their 2 sold out shows! 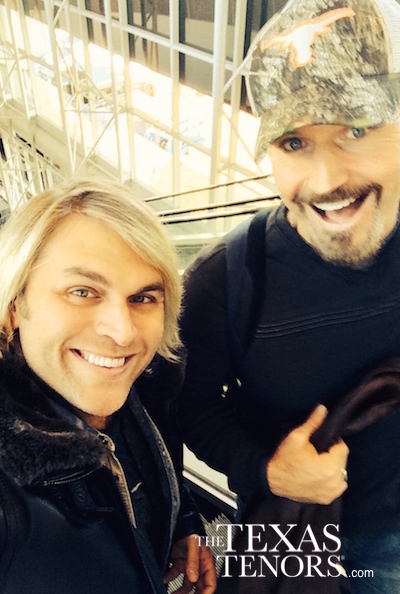 Marcus Collins and JC Fisher in their own Amazing Race!

Here’s a look at The Texas Tenors upcoming Concert Tour Schedule. Click any Venue listed below for Tickets and information.

Wishing you and yours A Merry Christmas and Happy Holidays!
The Texas Tenors