Kate Kompas | SCTimes.com – Life has dramatically changed in the past six years for Marcus Collins.

That’s the amount of time it’s been since he and his friends John Hagen and JC Fisher formed The Texas Tenors for the hit reality show  “America’s Got Talent.”  Before the show, the three friends had never sung together as a group.

Hagen and Fisher had opera backgrounds, while Collins was more pop and Broadway. The classical crossover trio’s versions of a range of music landed them in the finals and launched a new chapter for the three men. Collins said they didn’t know what an audience would think of the three of them in cowboy outfits singing classical music.

“We’ve taken that 15 seconds of fame, you might say, and turned it into a career,” he said. Since “America’s Got Talent,” The Texas Tenors have performed more than 1,000 concert dates.

But this week’s stop in St. Cloud is their first time in Minnesota, Collins believes. The Texas Tenors will perform three shows this weekend at the Paramount Theatre. They have 10 band members at their performances.

“For all the stars to line up, sometimes it takes a while,” Johnson said.

St. Cloud audiences seem to like shows such as “America’s Got Talent,” and other tenors acts have done well at the Paramount.

“I think a lot of the world is just sort of mesmerized by the male tenor voice,” Johnson said. “When you have a group that will sing a wonderful country song, then a minute later go into a Pavarotti-style opera aria, … that’s a cool show.”

The Texas Tenors are considered the most successful touring act to come out of “America’s Got Talent.”

“The business is a full-time job because we manage and produce ourselves,” Collins said in a phone interview from his Los Angeles home. “It’s gone from zero to 100 overnight.”

The trio now loves television as a medium; one of their PBS specials won an Emmy. Collins called “America’s Got Talent” a whirlwind, but an incredibly positive experience.

“We spent 14-hour days getting ready to sing that 90 seconds for the television audience,” he said. “It was stressful but it was fun, and the judges were really nice and the production team was really nice.”

“We loved being on the show. It gave us this opportunity to be seen by so many people,” Collins added. 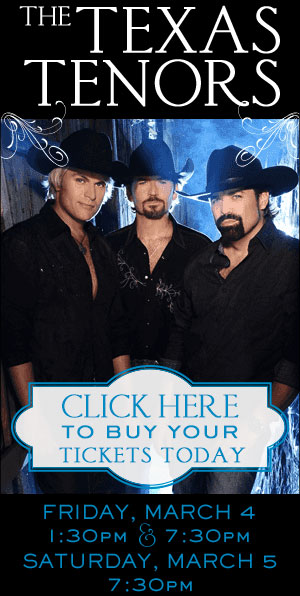 Next Post:The Texas Tenors’ bring blend heard around the world