The Texas Tenors “DAZZLE” Fort Worth

The Texas Tenors dazzle at Concerts in the Garden 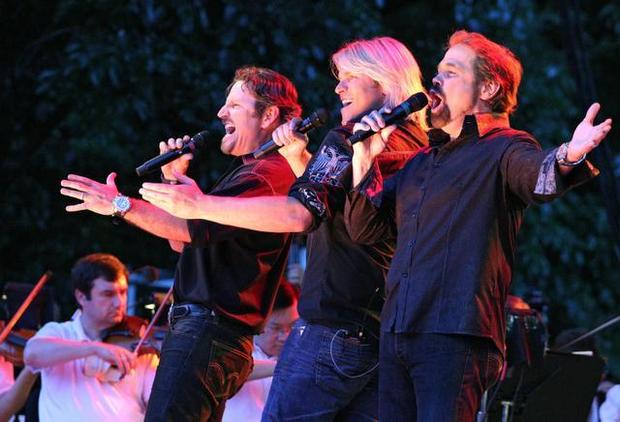 The Texas Tenors — from left, JC Fisher, Marcus Collins and John Hagen — perform with the Fort Worth Symphony Orchestra at opening night of the Concerts In The Gardens series.

FORT WORTH The Texas Tenors, a trio out of Houston that got its big break on America’s Got Talent back in 2009, joined the Fort Worth Symphony Orchestra, under the baton of series artistic director Andres Franco,

to open the orchestra’s popular Concerts in the Garden series in the Fort Worth Botanic Garden.

The music: No jazz or rap was offered, but most other bases were covered. The Tenors — JC Fisher, Marcus Collins and John Hagen — played pass-the-solo on country, rock and classical numbers that usually also required them to show off their dazzling harmonizing. Tunes by John Denver and the Rolling Stones rubbed elbows with Puccini opera arias, with each singer adding a slightly different color to the canvas being painted. All three were outstanding, but Hagen’s highly operatic voice was especially breathtaking.

The mood: Exceptionally relaxed. The crowd of 1,700 was more like a traditional symphony audience than the usual patrons for this series, which offers more pop than classical. The crowd was into the show, but no one tried to start a mosh pit.

Memorable moment: A wonderful reinvention of the Stones’ Wild Horses. Hagen’s vocal and orchestral arrangements of the Jagger-Richards ballad were compelling and made excellent use of the trio’s talents.

Next Post:The Texas Tenors on the cover of SOURCE Magazine