The Texas Tenors cultivate a devoted fan base

On Saturday, Judy Bickford will leave her home in Newfield, Maine, at 4 a.m. She will pick up her two traveling companions and drive two hours to the airport. At 7:50 a.m., the three women will board a direct flight to North Carolina. They’ll land in Charlotte at 10 a.m.

On Saturday night (October, 18, 2014), Bickford will be in Greensboro, about 850 miles from where she started her day, to watch the Texas Tenors perform for the 55th time. She kept up with the mileage she covered while following the Tenors until it topped 50,000. Then she lost track.

“I love to go to the shows to see the people who haven’t seen them before,” Bickford says. “I love to watch people’s reactions.”

Bickford, like many other Texas Tenors fans, first fell for the three country-classical singers on the reality TV show “America’s Got Talent” in 2009. Since then, the trio has performed more than 670 shows in the past five years. The Tenors’ latest album, “You Should Dream,” hit Billboard’s Top 10.

The trio will partner with the Greensboro Symphony on Saturday at Westover Church as part of the Pops Series.

“We decided this year to try to step up our Pops Series and take it to another level,” says Lisa Crawford, the president and CEO of the Greensboro Symphony. The Texas Tenors are a good fit because they have high-quality vocals and a strong stage presence. “We’re looking for the whole package.”

The Tenors also fulfill the Pops Series goal to appeal to a broad range of musical tastes and introduce new audiences to the symphony. The men’s repertoire combines classical, country, gospel and Broadway. When not performing alongside a symphony orchestra, they might pull in Coldplay or Bruno Mars.

All three members — JC Fisher, John Hagen and Marcus Collins — grew up around country music and received classical training in college. Each one lives in a different part of the country, but the band is based in Houston.

A friend who is a symphony agent helped the Tenors orchestrate their songs and connect with symphonies nationally and internationally. A librarian in Nashville, Tenn., sends the arrangements to the symphonies ahead of time, and the band arrives the night before the show, just in time for a morning rehearsal before the evening performance.

“The presentation is always different every night,” Collins says of working with various symphonies. “But we feel like it’s a really uplifting experience, and hopefully it inspires people.”

Collins met someone a couple of weeks ago who was seeing her 173rd Texas Tenors show. Bickford isn’t there yet, but she’s working on it. She once saw the Tenors on a Thursday and Friday in Grapevine, Texas, drove more than 300 miles for the Saturday show in Galveston and traveled back to Grapevine in time for Sunday’s show. The Tenors call her and her entourage the Cowgirls from Maine because they occasionally don their hats for the shows.

After Saturday night’s performance in Greensboro, Bickford will drive to Columbia, S.C., for her 56th Tenors show.

The she’ll wake up Monday morning and make her way back home. 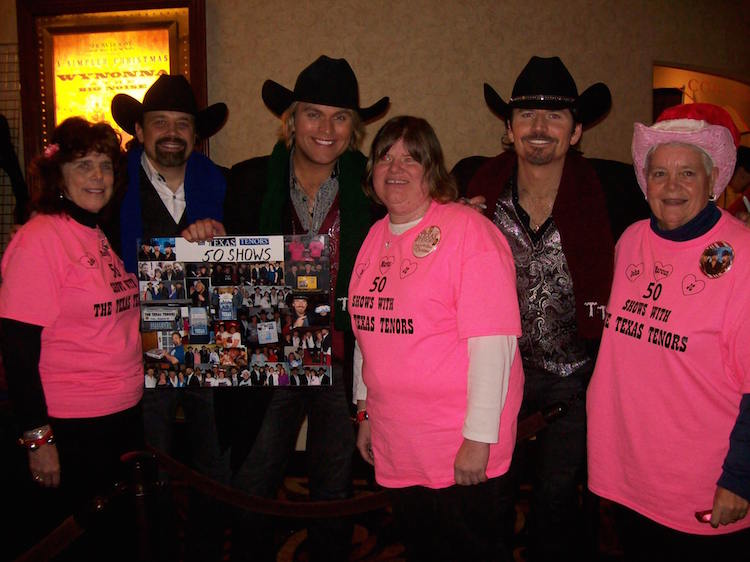 Next Post:VIDEO: The Texas Tenors Suns Vs Lakers