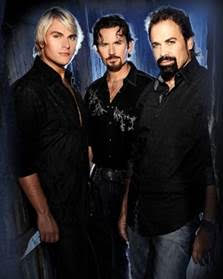 The Texas Tenors, from the left, are John Hagen, Marcus Collins and JC Fisher

PoncaPost.com – The Carl and Carolyn Renfro Endowed Lectureship Program is proud to announce that The Texas Tenors will be performing live on the stage in the Kinzer Performing Arts Center (KPAC) at Northern Oklahoma College in Tonkawa, Wednesday, Sept. 28.

This is another exciting event provided by the Lectureship Program and continues to demonstrate Renfro’s commitment to bringing top notch speakers and entertainers to area community members at an affordable price.

“I want to make excellent speakers and top notch entertainers available to community members in this area and keep it reasonable. The Texas Tenors are an incredible group and have been sharing their wonderful vocals around the world since they appeared six years ago on NBC’s Americas Got Talent competition. There will be a couple of options available for this event, dinner and the concert or just the concert. Whichever option you choose I don’t think you will be disappointed.” Renfro said.

With their Emmy Award winning PBS special now airing across the country, and Billboard chart topping albums; it’s easy to see why The Texas Tenors are America’s favorite new tenors. Since their whirlwind debut six years ago on NBC’s America’s Got Talent, The Texas Tenors have accumulated a long list of awards, accolades and excited fans. They have performed more than 1,000 concerts around the world, including a 24-city tour in the United Kingdom, Shanghai, China and collaborations with some of the most prestigious symphonies, performing arts centers and arenas in the United States. People are clearly enjoying their talent as they were recently named the #10 Classical Artists in the world according to Billboard magazine.

Tickets for the dinner and concert event will go on sale beginning at 9 a.m., August 24, and there will be two options available. The first option is a reserved table for eight for $300, which includes dinner in the Renfro Center at 6 p.m., doors open at 5:45 p.m., followed by the 7:30 p.m. concert with preferred seating in the lower section of the KPAC. The second option is the concert only for $15 on a first come, first served basis for seats in the upper section of the KPAC. The doors will open for the concert at 7 p.m. The dress attire is business casual.

Tickets may be purchased with a credit card by calling 580.628.6214 or in person at the Development Office located in the Vineyard Library-Administration Building on the NOC Tonkawa campus.

These programs are made possible through the generosity of former Oklahoma State Regent Carl Renfro and the late Carolyn Renfro who established the Carl and Carolyn Renfro Endowed Lectureship Program with a gift in 2006. The primary purpose of the endowment is to provide support to cultivate and enhance the cultural and community enrichment offerings in northern Oklahoma to include lecture and performance series at Northern Oklahoma College Tonkawa and in the Ponca City area.

This event is sponsored by the Carl and Carolyn Renfro Endowed Lectureship, the Renfro Family Foundation, and Northern Oklahoma College.

If you have questions concerning this upcoming event or need additional information, please contact the Northern Oklahoma College Development Office at 580.628.6214.

Next Post:VIDEO: The Texas Tenors to perform for two nights at Bally’s