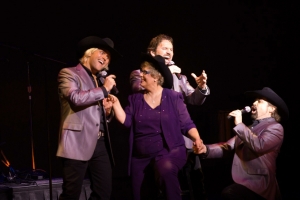 The Texas Tenors took the audience by storm with their incredible vocal voices. They came, they saw and they conquered with their Southern-country swag.

By simply blending country, gospel, classical and Broadway with a hint of charm and humor, The Texas Tenors made this night a performance to remember. Audience member Sarah Glisan said, “I love them! I love them on TV, and I love them in person. They’re excellent.”

The trio, Marcus Collins, pop voice; JC Fisher, country voice; and John Hagen, classical voice; did not only captivate the audience with their beautiful and harmonious songs, but also the interaction that came with the performance.

They started by randomly selecting a lady from the audience and singing to her on stage.

Then they acknowledge all veterans in attendance, a channel 21 event ticket winner and two women who came from Maine to Shippensburg just to see their show.

By doing so, the trio took the concert to a new height by becoming the precedent for all upcoming H. Ric Luhrs Performing Arts Center events. Judy Friese, a Shippensburg University alumnus, said, “They are on my Top 3, along with, ‘Fiddler on the Roof,’ and ‘Capital Steps.”

The trio sang Italian, gospel, country and even some classical pieces that demonstrated their true vocal talents. And yes, I said Italian. In honor of Luciano Pavarotti, an Italian operatic tenor, the trio sang “Nessun Dorma,” one of the best-known tenor arias in opera.

Even though each one of the trio has a different background in music, they were all able to blend their voices in such a way that it almost made these pieces one of their own.

Shippensburg University alumnus Della Claar said after the performance, “We bought the CDs.”

“So you know they are good. I like the variety and the blending of the voices,” said Claar.

Beside the trio voices and audience interaction, one of the characteristics that made the performance so electrifying was how humble and fortunate these guys are.

Once struggling to pay their bills, these guys are the epitome of hard-work, sacrifice and courage.

Since winning the hearts of millions of fans in 2009, they have used their recognition in support of Home for Our Troops, an organization dedicated to helping those who have selflessly given to our country and have returned home with serious disabilities and injuries since Sept. 11, 2001.

One can say that they are the Tim Tebows of music. 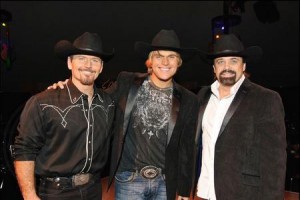 Overall, the Texas Tenors were known as good but the audience did not expect them to be this good. The trio went as far as performing their semi-final and final songs that won them the chance to be the No. 1 vocal group of “America’s Got Talent.”

Next Post:The Texas Tenors and The Bay Atlantic Symphony