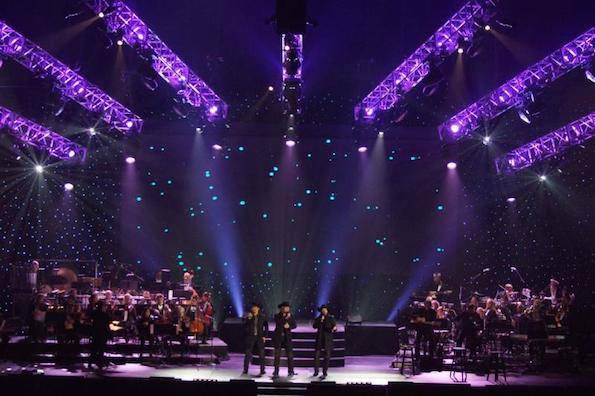 After taking “America’s Got Talent” by storm four years ago, the operatic cowboys known as the Texas Tenors have taped a PBS special on which a grandMA2 light controlled all the lighting fixtures. A.C.T Lighting is the exclusive distributor of the MA Lighting in North America.

Known for taking audiences “from Alabama to Puccini,” the Texas Tenors (John Hagen, Marcus Collins and JC Fisher) performed a diverse set at Grand Canyon University in Phoenix with the Phoenix Symphony, the New Life singers and the college’s choir. The resulting special, “You Should Dream,” will air on PBS stations nationwide.

Lighting designer/director Matthew Firestone already had a show for the Canadian Tenors under his belt when he was tapped for the Texas Tenors’ special. “The Texas Tenors had seen the show and liked it. They hired the director of that show, and he insisted they bring me in, too,” says Firestone.

“We didn’t have a lot of time – three days to program 18 songs. But we were pretty much done when we got on site thanks to three days of pre-viz,” he explains. Firestone and programmer Eric Gorleski “got in crucial previs time” at the A.C.T offices. “Without previs, it wouldn’t have worked – once we were on site we had an overnight load in for a 2 pm start. That’s a really quick turnaround.”

Firestone notes that, “a major plus on this project was using grandMA 3D for previs. I had used it before, and it went really well. The 3D is so integrated – we got some really good looks.”

He says specifying the console “was a no brainer” and cites grandMA2’s “ease of programming, speed and very detailed cueing” as attributes he appreciates.

“Being able to pull off the project in that amount of time was unbelievable,” Firestone concludes. “This was a very painless job. With the support of A.C.T and grandMA 3D we were able to produce a really good quality television program with little to no on-site programming time.”

Next Post:News From The Newport, Arkansas Independent