Review: THE TEXAS TENORS: DEEP IN THE HEART OF CHRISTMAS BRINGS HOLIDAY JOY TO FANS at The Straz Center For The Performing Arts

BroadwayWorld.com | by Deborah Bostock-Kelley – To say something magical happened last night in Ferguson Hall at the Straz Center would be like describing The Texas Tenors as just three gorgeous singers from Texas. Magic doesn’t fully encompass what happened in that hall as the enormous vocals of John Hagen, Marcus Collins, and JC Fisher enveloped us, filled up the entire theatre for “The Texas Tenors: Deep in the Heart of Christmas.”

Many, many special moments stand out.

With JC’s video accompaniment playing as a backdrop, the superior talents of an incredible 4-piece band, and lighting and sound tech skills of Les Lankhorst and Ed Sandor, the show opened with the holiday classic “Oh Come, All Ye Faithful” than began to showcase audience Christmas favorites like “Drummer Boy,” “Joy to the World,” “White Christmas,” “Mary Did You Know,” “Oh Holy Night,” and new arrangement of “Ave Maria,” among many others. JC’s beautiful and original Christmas song “Favorite Time of Year” was complimented by a video of old home movies and photographs.
In addition to holiday favorites, The Texas Tenors performed beloved John Denver tunes and a famous Righteous Brothers song. Not “Unchained Melody,” and perfectly timed, the three sang along with a video of Bill Medley performing in his youth and today. Their electric country hit “Bootdaddy” was followed by a video of their debut on America’s Got Talent in 2009.

Throughout the night, much of the audience was knee-slapping, toe-tapping, hand-swaying or clapping right along to the sentimental songs of our childhood. 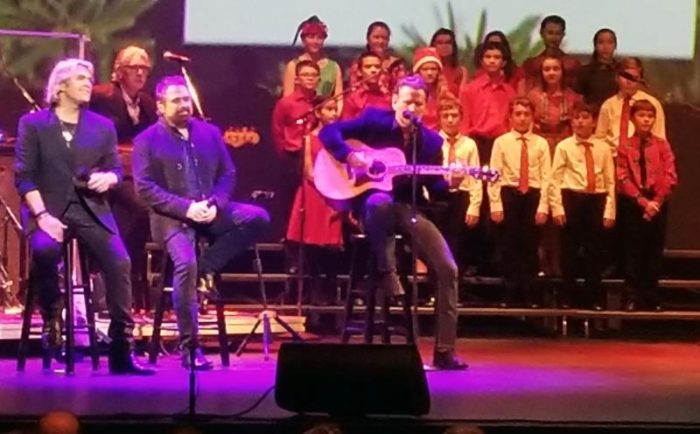 To make the evening even more special, the talented students of the Patel Conservatory Youth Choir joined the men onstage during part of both the first and second half of the show.

And you can’t mention the word special without discussing the sheer excitement and enthusiasm of the singers sharing their visit to The Shriner’s Hospital and the hospital guests in the audience. As a Tampa native, I feel that should know that the several of the men and women who serve as administration at The Shriner’s Hospital were once patients, but I didn’t until the men enlightened me. To listen to them talk about their visit and the two special patients, Jazmin and Bentley, that came to see them perform, was a beautiful part of the night. You couldn’t help but have a lump in your throat when Bentley reacted to seeing himself of the video screen. A portion of The Texas Tenor’s children’s book and music CD, winner of the 2015 Gelett Burgess Award, “Ruckus on the Ranch” goes directly to the Shriner’s Hospital.


Another moment that will stay with me is the audience’s instant response to the first few notes of “God Bless the USA.” No matter where you stood on the political spectrum, during that song, we were one. The entire audience rose from their seats, like on cue, as The Texas Tenors sang about our country. I think my eyes might have leaked and I know at its cessation, I was covered in goosebumps. It was, without a doubt, one of the most incredible moments I have experienced at The Straz Center.

The Texas Tenors then proceeded to recognize, not only the Veterans in the audience, but the families that support them. 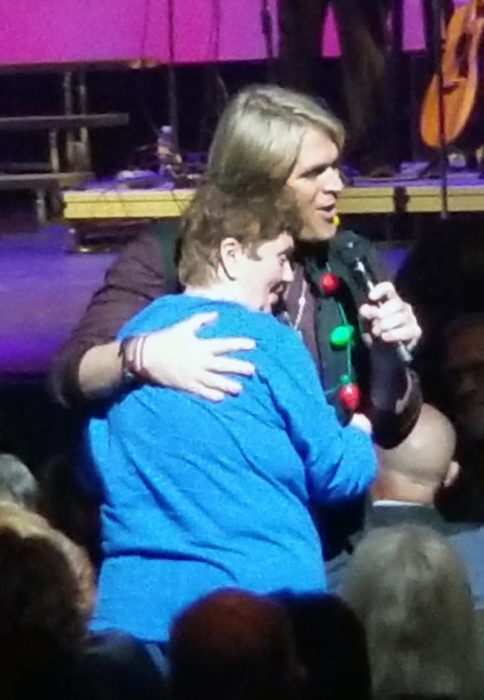 After intermission, the singers performed holiday classics and Marcus bantered with the audience about the very depressing “Last Christmas” and downright mean to Grandma, “Grandma Got Run Over by a Reindeer.” When he asked who writes that kind of stuff, an audience member quipped, “Grandpa.”

I think what I enjoyed most about the concert was the down-home-come-pull-up-a-chair-and-hang-out genuineness of the men. Despite accolades, Emmy awards, top Billboard recognition, and tours across the world that could make anyone pompous, they are still as friendly and down-to-earth as they appeared in their first interview for America’s Got Talent, before their life skyrocketed and their name became household. Self-produced, you can tell they appreciate every success and love what they are doing. That gratitude and passion carried over to the audience during “The Texas Tenors: Deep in the Heart of Christmas” and just another reason why this fan in Tampa will be voting every week for them to win AGT: Champions in January.

Next Post:VIDEO: How the Texas Tenors went from construction to ‘America’s Got Talent’