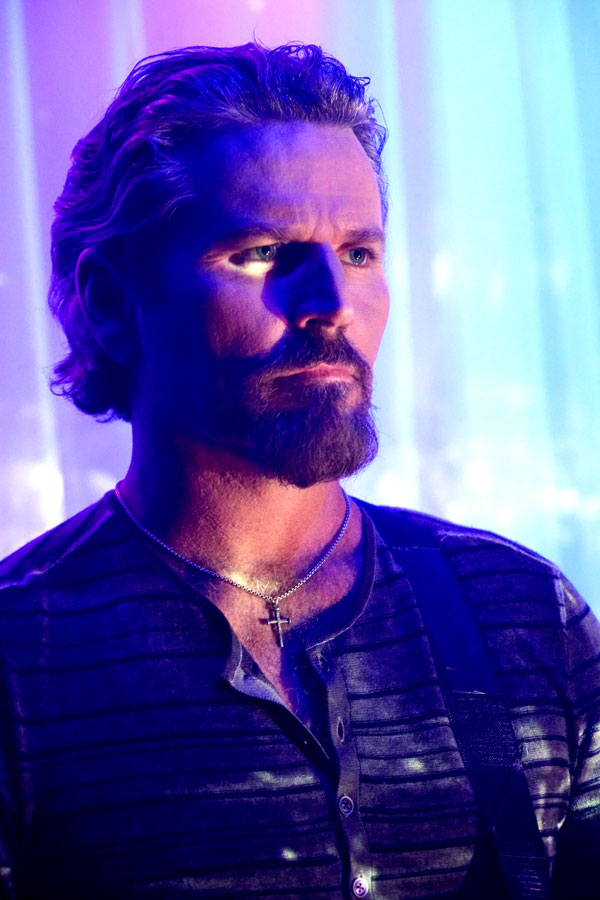 Meet JC Fisher of THE TEXAS TENORS at SEMA – Get a free copy of TEXAS TENORS #1 release called “RISE”! at the MB Quart booth 60012 during the reveal of the Shelby Super Cobra at 9:30am Tuesday October 31. 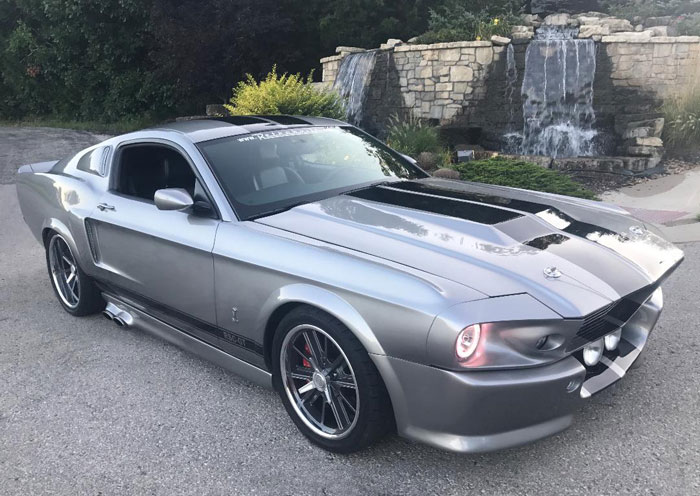 JC Fisher of the Texas Tenors said, “I grew up as a fan of muscle cars and being part of this project is an honor and unprecedented opportunity. We sing on stages all over the world talking about living your dreams, and following your passion. Being part of this group has given me some amazing opportunities. I’m so thankful to be able to be part of this 1967 Super Cobra build. This is a dream come true!”

Alden Stiefel, President and CEO of Maxxsonics USA said, “We are proud to be part of JC’s Shelby Super Cobra. We are all gear heads but to have a musician of JC’s caliber demand MB Quart for his project is a real vote of confidence for all that Maxxsonics has done with the MB Quart brand over the last 8 years!”

JC Fisher performs with The Texas Tenors, now touring across the country in support of their Billboard #1 new album called “RISE”

The following is an excerpt from an interview with MB Quart for the Quarter Note Blog.

SO – How did your music career cross over with your love for fast cars?

JC – I grew up a farmboy/gear head and somehow turned into a musician. What started as performing the National Anthem at basketball games and singing at Church has turned into an actual career. I am grateful and blessed to be singing around the world with my two best friends. However, I was also anxious to pursue my interest in cars. The opportunity to build this 1967 Shelby came along, and I jumped on board. I’m now completely addicted to horsepower, insane cars and awesome sound systems. I find myself knee-deep in both my music career with The Texas Tenors, and with this Shelby Super Cobra project.

SO – Tell us why did you chose MB Quart for the Shelby Super Cobra?

JC – Because I’m a musician with a slight hearing loss, I feel the need to not only hear precise sound but “feel” it as well when I sit in the driver’s seat. I have chosen MB Quart audio for this project because the speakers are crystal clear and the subs hit hard. A few years ago, I installed a MB Quart system in my 1938 Ford Rat Rod and I loved the clarity and the way the bass pounded. As we started the Shelby build, I knew the audio system had to go above and beyond. I will often listen to rough mixes from the studio in my car after a session and then make changes in the mix based on the details I can hear in the car that you just don’t hear sitting behind the big mixing console. My very first listen to the final mix of our new country song called,“BootDaddy” was in my Mustang at a car show in Kansas City. I’ll never forget how the bass pounded in my MB Quart system. People came over from all areas to hear the song.

SO – Well, we are looking forward to having you in the booth at SEMA

JC – Me too, it’s very exciting for me. This is my passion. Oh, and I will be signing off on the final car and audio system in the MB Quart booth. I have no doubt that it is going to be incredible. I hope a lot of people come and hear my newly installed MB Quart system, and talk to my friends Chimpo and Justice at LIS Audio about the custom installation!

JC Fisher’s love for the Classics goes beyond Music. His one of a kind 1967 Retrobuilt Mustang Super Cobra makes automotive history. 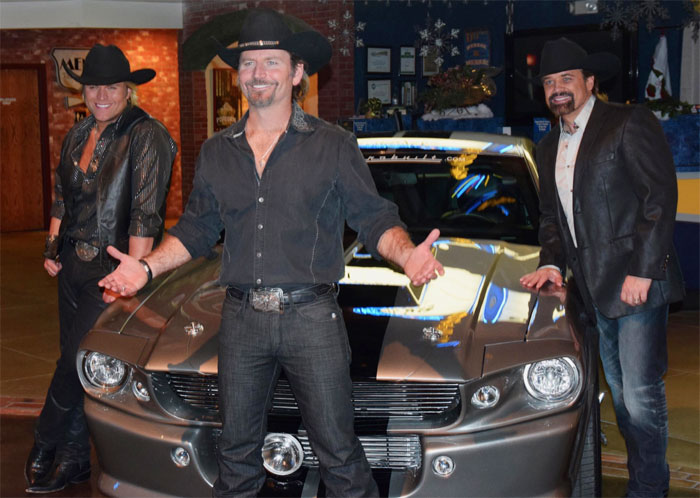 Chart topping artists The Texas Tenors, known for their Emmy Award winning TV Special and newly released #1 Hit Album ‘RISE,’ often take a modern approach to singing the Classics. Founding group member, JC Fisher has taken the same approach to the automotive industry by rebuilding the king of American muscle cars, the 1967 Shelby Mustang. Fisher transformed his 2011 Mustang into a 1967 Mustang RSC-GT. The finished product will be featured on the world’s largest automotive stage in Las Vegas, Nevada at the 2017 SEMA Show this Fall. Retrobuilt, a private company in Nixa, Missouri spearheaded the transformation.

The idea of taking a new Mustang and ‘retrobuilding’ it to resemble the vintage classic was so impressive, even Carroll Shelby took notice (before his passing in 2012). Granting the only license and permission to Retrobuilt, this is the first 1967 authorized by Carroll Shelby for production.

“I grew up as a big fan of muscle cars, and being part of this project is an honor and un-precedented opportunity. We sing on stages all over the world about living your dreams. I’ve always had a passion for cars and the 1967 Shelby Mustang is my absolute favorite. Owning one that can make automotive history is a dream come true,” says JC Fisher of The Texas Tenors. Retrobuilt Owner Clinton White believes it’s the perfect combination of old and new, “This gives us all the beauty of the classic without the headaches of owning an older car.”

Transforming the 2011 Mustang began with stripping the car exterior and interior down to the metal chassis leaving the engine and engine compartment (and car warranty with Ford Automotive) intact. Build of the new exterior began using original ’67 fenders, Sport Slats and bumpers but required complete customization of the body molding as the chassis of a modern Mustang is four inches wider than the original 1967 chassis. The hood, front fenders, doors, quarters and rear deck lid were all made of fiberglass, leaving the roof as the only original piece on the cars exterior after the full body conversion is complete.

On the inside, a custom deluxe ultra leather interior with vertical inserts covers the power bucket seats along with complete custom upholstery. Foot well lighting along with cobra panels and insignias were added, the steering wheel and center console were hydro-dipped with a cobra snake skin pattern, the windows were tinted with a high heat rejection ceramic nanotechnology tint with 5% VLT.

The music is provided by a full MB Quart Audio System that has been integrated into the source unit. The MB Quart system provides 1500 watts of power through the ZA2 Series amplifier and connected to the top of the line Z Series components speakers in the front kick panels and the back-package tray. To provide some powerful bass drum and bass guitar tones that can keep up with the muscle under the hood, the installation wizards at LIS Audio designed a subwoofer enclosure with a shallow mount M-Line subwoofer system that trims out the trunk but still leaves enough room for a guitar case. The team at LIS Audio also added custom LED lighting and added one-of-a-kind trunk fascia with Super Cobra badging to mold out the trunk area for a unique finished look. Not to mention, the new classic keeps all the modern conveniences of A/C, navigation system and every powered accessory.

The final piece of the puzzle happened under the hood. Starting with the stock 5.0-liter Coyote engine running 425HP from the factory, power and performance will be boosted with the help of a Procharger D2 supercharger, Cervini exhaust, custom long tube headers by Kooks and a Diablosport tuning system. The final touch added was a single stage dry direct port nitrous system with 10lb bottle and 150 shot nozzle. The results speak for themselves increasing power to an impressive 850HP and more than 675 lbs. of torque to the rear wheels.

Fisher has been documenting the entire process from purchase of the 2011 donor car through presentation of the 1967 Mustang RSC-GT on the SEMA stage October 31 – November 3, 2017. Adding to the excitement, the car was admitted into the 2017 SEMA Ignited Battle of the Builders competition following the SEMA show. Fisher adds, “The 2017 SEMA Builders show gives the public a rare opportunity to view hundreds of customized vehicles featuring the industry’s most innovative products. We are looking forward with great anticipation and excitement to showing off this one of kind classic!”

Prevoius Post:America’s Got Talent’s Most Memorable Finalists: Where Are They Now?