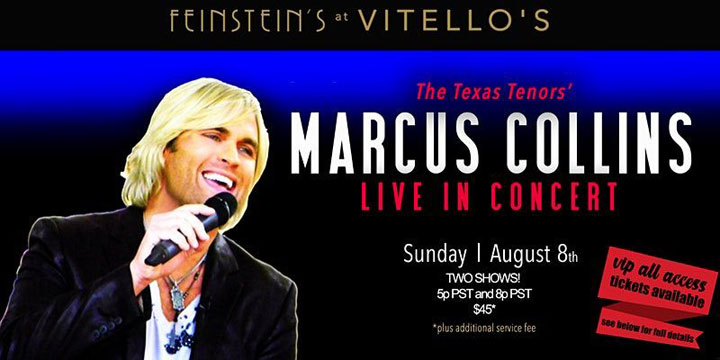 You’ve seen The Texas Tenors on ‘America’s Got Talent’ and PBS, now see Marcus Collins on his own for a special ONE NIGHT ONLY event featuring selections from his Billboard Top 10 solo record “BRAND NEW LIFE”, the Tenors new #1 album “Outside The Lines” and so much more!

This will be an evening of music to remember as Marcus, on loan from The Texas Tenors for the night, takes you on a musical journey through his life and career.

With hits from Broadway and classic standards to Pop, Country & originals. Don’t miss this rare chance to see him live in a small, intimate room with “up close” seating!

Stick around after the show for a unique and candid interview in The Encore which will include a Q & A and hosted by our very own Brad Roen.
Seating is extremely limited for both shows & The Encore, so get your ticket now and secure your spot.

Can’t attend in person? No worries stream both events either Live or watch later on VOD so you won’t miss a thing!

Marcus Collins was born is a small town and began to sing at the age of 4. He first learned how to sing by emulating his favorite radio artists like Garth Brooks and George Michael before training classically in college. Along with numerous talent shows, fairs, and cruise ships, Marcus has also performed in New York City with the cast of Hairspray, Off-Broadway’s Altar Boyz as Matthew, Joseph and the Amazing Technicolor Dreamcoat, and as Jinx in Forever Plaid.

Beyond music he has worked extensively as an actor with appearances in over 100 episodes of network television, 25 films, and numerous commercials including P.S. I Love You, Across The Universe, 30 Rock, Terminator: The Sarah Conner Chronicles, Sex and the City, recurring roles on One Life To Live and As The World Turns, and the lead character in the video game Alone in the Dark.

Marcus is proud to bring a contemporary element to The Texas Tenors and would like to thank everyone who voted for the group, America’s Got Talent, and his family for their love and support. Marcus Collins website is MarcusCollins.us