The headliner for the 2019 Boston Pops Fireworks Spectacular, under the direction of Keith Lockhart, is Queen Latifah—Grammy-, Emmy-, and Golden Globe award winner and Academy Award nominee—who will be featured in a selection of hits from her diverse catalog, which touches on genres including jazz, rap, R&B, Broadway, and more. Boston’s premier Independence Day celebration will also feature musical icon, songwriter, storyteller, and singer Arlo Guthrie, who will be featured in a musical tribute a half-century in the making—Summer of ’69—commemorating the 50th anniversary of Woodstock. Guthrie will take audiences back to a year of unprecedented scientific exploration, social change, and creative ferment with songs that he performed at Woodstock, as well as other popular selections from his eclectic output. The Boston Pops Fireworks Spectacular on Bloomberg TV and WHDH-TV on July 4 from 8-11 p.m. will be available for streaming on Bloomberg.com. The concert stream can also be viewed on Bloomberg’s mobile and OTT platforms across Apple TV. As is the tradition, a major 20-minute fireworks show designed by Grucci Fireworks and accompanied by the music of the Boston Pops and other popular music of the past and present, will bring the Boston Pops Fireworks Spectacular to an end.

In addition to the performances by Queen Latifah (debuted with the Boston Pops at Symphony Hall in 2017) and Arlo Guthrie (debuted with the Boston Pops on July 4, 2001 and performed with Pops during  the 2019 season at Symphony Hall), the 2019 Boston Pops Fireworks Spectacular will also spotlight two popular acts from America’s Got Talent. They include 16-year-old vocal phenomenon Amanda Mena, a Massachusetts native and a semi-finalist on America’s Got Talent whose memorable audition earned her the coveted Golden Buzzer, sending her straight through to the live show in 2018, and the three-time Emmy Award-winning classical crossover vocal trio, the Texas Tenors, the highest-ranking music group in the history of America’s Got Talent (making it to the top four finalists in the show’s fourth season), whose sales are the third highest in the history of the show.

The 2019 Boston Pops Fireworks Spectacular—one of this country’s largest and oldest public Fourth-of-July events and one of the biggest annual outdoor concerts anywhere in the world—will open with the event’s traditional F 15 Eagle flyover, by the 104th Fighter Wing from Barnes Air National Guard Base in Westfield, Massachusetts, followed by a special flag presentation by the United States Air Force Honor Guard from Washington, D.C.  The Pops is also pleased to present the U.S. Navy Band Sea Chanters Chorus, who will perform patriotic classics and new favorites. 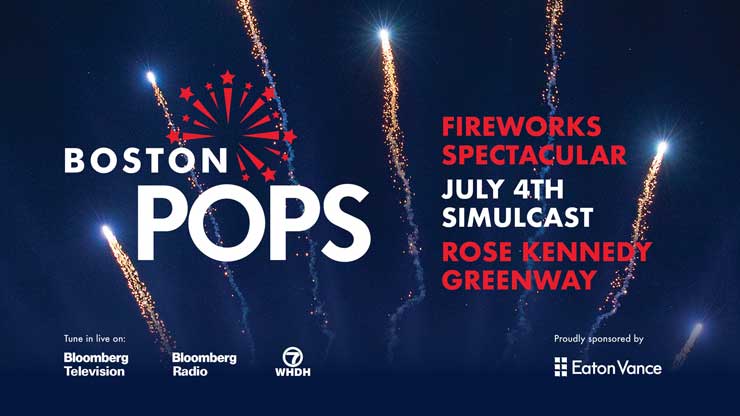 The Boston Pops Fireworks Spectacular will take place on July 3 (concert, 8-10:30 p.m.) and July 4 (concert and fireworks, 8-11 p.m.) at the Massachusetts Department of Conservation and Recreation’s (DCR) Hatch Memorial Shell on the Charles River Esplanade.