Making its first show appearance, the world’s first 1967 Mustang RSC-GT will be featured at the entrance of the Snake Pit at the 56th Annual O’Reilly’s World of Wheels in Kansas City February 12-14, 2016.

JC Fisher, of the Billboard chart topping musical group, “The Texas Tenors”, has done the unthinkable and transformed his 2011 Mustang GT500 in to a 1967 Mustang RSC-GT. Working with Retrobuilt, in Nixa, Missouri, a full exterior body conversion was completed leaving only the roof as the original piece of the car’s exterior. On the inside, the upholstery was replaced with a full deluxe leather interior, the steering wheel and center console were hydro-dipped to look like carbon fiber and several other bells and whistles were added. Under the hood, power and performance were boosted on the stock 5.0-liter Coyote engine with the help of a Procharger supercharger, Cervini exhaust, custom long tube headers by Kooks and a Diablosport tuning system. The results increased the factory performance of 425HP to an impressive 800HP and more than 550 lbs. of torque to the rear wheels. Keeping all the modern conveniences and the reliability of today’s technology, this car exudes the allure and beauty of the vintage classic!

Stop by and see this one of a kind classic at the Kansas City Convention Center in Bartle Hall. JC will be there Friday night – so stop by and say Hello! 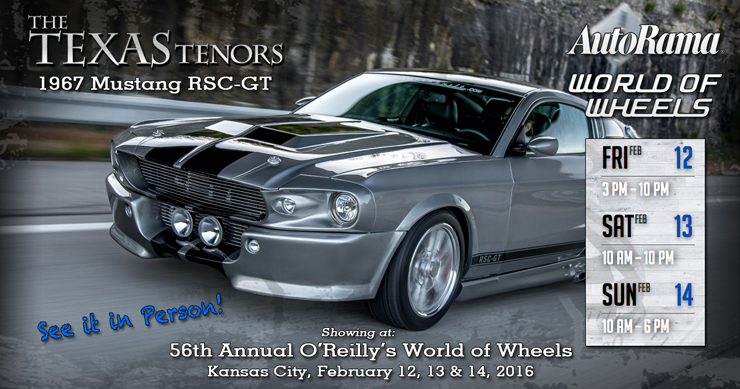 Prevoius Post:Review: The Texas Tenors a crowd-pleasing brand of fun

Next Post:The Texas Tenors to Perform at Lyceum Theatre next Month